While planning a trip to Scotland in 2010, I couldn't help but notice that most visitor websites had a section for "walking."

"Dining," "lodging," and "entertainment" I was used to, but "walking" seemed unusual, especially since it appeared on nearly every visitor web site we looked at.

I figured it must be a highlight of visiting Scotland, so we started looking at the available walks. A walk around the city didn't seem like such a special thing, so we looked at longer walks in the countryside. 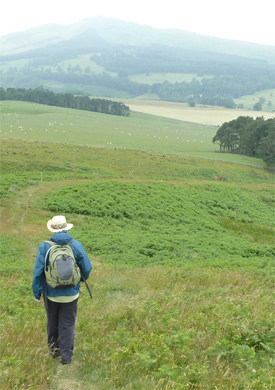 Scotland invites long-distance walking There was a multi-day walk around one of the islands off the west coast that looked appealing, but we were a little unsure about the small size of the towns at the end of a day of walking. What if there was no room at the inn? We'd be on foot, in a foreign country, without a tent, sleeping on some park bench in the Scottish drizzle. But the idea of a multi-day walk with a town at the end of each day appealed to us. A B&B with a shower in a town with a well-earned pub sounded great!

We settled on the Borders Abbeys Way, a five-day loop walk between five small towns just on the Scottish side of the border with England. The walk itself was great... (I could probably write several thousand words about that little adventure). And the preparation for the walk really got me in shape. All in all, in spite of some (unrelated) bad times at work, it was one of the best summers of my life.

I've since looked for something like the Borders Abbeys Way closer to home, but not found anything. There are some canal trails on the East coast. I haven't tried them yet, and in Colorado, we don't have anything quite like that. 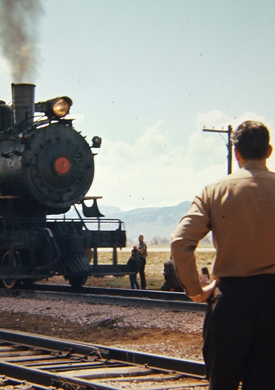 Was the American West settled differently? What we do have is The Colorado Trail. Yes, it's a multi-day hike, but there are hardly any B&Bs or showers along the way. If you hike the Colorado Trail, you commit to many days of backpacking and sleeping in a tent. No friendly pub at the end of every day, either.

My own theory is that towns in the U.K. are older, and were settled a day's walk away from each other. By the time the American West was being settled, we had horses and railroads, and therefore towns were settled farther apart.

And when our towns aren't separated by 30 miles, we might have the opposite situation: they have grown together into one giant urban mass. For example, you could walk from Centennial to Broomfield, passing 8 separate "cities," and never leave sight of a strip mall or suburban lawn. And you'd be dealing with cars the whole way.

We culminated our training for the U.K. walk by walking from Boulder to Longmont, staying in a B&B, and walking home the next day. At the time, our options were to walk on the Diagonal Highway, next to several lanes of cars traveling at 65 miles per hour, or to zig-zag along the older farm roads. We opted for the farm roads, even though it meant we'd be walking about 15 miles instead of about 12. And even so, we were often walking on the narrow shoulder of a road with the occasional car zooming past.

Still, it didn't involve urban sprawl (well, not too much), and it got us to a town with a shower, and a friendly pub after a solid day's walk. 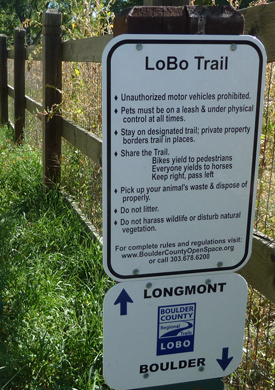 LoBo opened July 14, 2011 A year later, we read about the opening of the LoBo Trail. We were very excited. Our friend Jeff joined us for the trail's inauguration on July 14, 2011. We joined about 3 other brave Boulderites in riding the trail from Boulder to Longmont. The LoBo is much more direct than the route we walked, and has much less traffic.

For the inauguration, we rode to Niwot where we met the contingent of 30 or more cyclists from Longmont for a ribbon-cutting ceremony. We were among the the first people to ride from Boulder to Longmont on the LoBo trail. And since the trail ends very near Oskar Blues, we stopped for appetizers and craft beer, then rode back home.

Since then we have ridden and walked the LoBo trail many times, and from both directions, usually in search of that UK long-distance countryside walking experience. When we're pressed for time we'll bike one-way and take a bus back home. Other times we'll walk partway, then turn around and head home again. 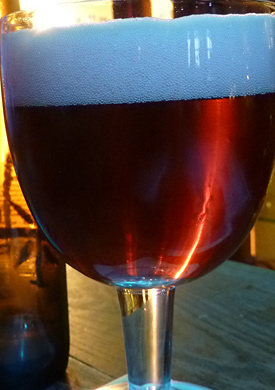 Our interest in craft beer has grown

Our interest in craft beer has grown since then, and we've gotten in to the habit of riding to a favorite brewery, as a destination, then riding home again. For a short trip we'll pick one closer to home; for a longer excursion we'll go all the way to Longmont and back.

We kept noticing new breweries opening along the way. We discovered others that were already open near the LoBo trail.

After many trips, we decided to share our interest in countryside excursions and craft beer with anyone who cared to read about it, and the Boulder Ale Trail was born.

Cheers to these breweries who sponsor the Boulder Ale Trail.

We're looking for sponsors from along the trail who want to encourage biking and walking to brews.

* We're encouraging our sponsors to offer this deal: show your bike helmet or a selfie from the trail today for anytime happy-hour discounts.

Cheers to these supporters of the Boulder Ale Trail.

We'd love to have sponsors who don't happen to make beer. Contact us now.

* Okay, we admit it. There are segments of the trail where there are cars. See the Route Overview page for more details.